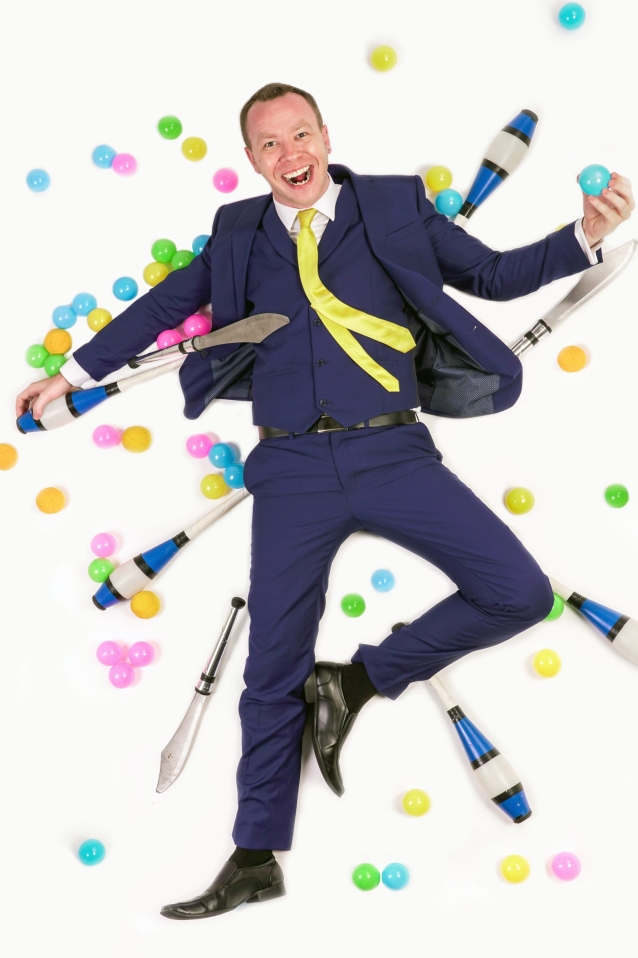 Need to bring hilarious laughter to your event?

Frantic, manic, energy filled shows, featuring an explosive combination of cutting edge juggling, variety, technology and audience involvement. All infused hilariously together by world record holding variety comic James Bustar. He brings the funny to the crowd in ways that are dynamic, ever-changing and explosive.

James was trained at the world renowned Flying Fruit Fly Circus in Australia and has been performing for more than 15 years. He was a finalist in Australia's Got Talent and is now a highly popular act on cruises worldwide and the holder of several World records.

He is also a popular star of panto and variety shows receiving rave reviews wherever he performs including recently as a star of the Cromer Pier Show, one of the most prestigious shows in the UK being the only remaining end of the pier show in the world, where, uniquely, James was invited back two years in a row due to audience demand.

He is cheeky and super quirky persona is only surpassed by his extraordinary talent and comical timing. Whether it's a blue chip corporate event or a family festival James gives his all and proves with every performance why he really is Australia's Comedy Juggling Superstar!
Shane International

A stand alone show built on his amazing abilities and his accomplishments have the audience gasping in admiration.
Greg Aplin
Member of Parliament

Had the whole crowd laughing and audience participation. If you are looking for a wonderful and hilarious show definitely book James for your next function.
Oxford Communications Group

James was able to adapt his show to include performances for our sponsors function, family stage and in the main arena each evening engaging with the audience in a way seldom seen with other performers. As a juggler James is extremely talented, as an entertainer he is exceptional.
CEO
Towoomba Royal Show

James Buster brings his comic side - unleashing a clever and expertly designed juggling act.
The Stage